Southern Italy is Known for It's Seafood, Here's Why

The South of Italy is known for the shore, sun, and seafood! Here are three regionally inspired recipes.

Just as in the United States, the South of Italy is distinct from the North. Southern Italy—basically from Naples down to Sicily—is very different from northern Italy, especially when it comes to the food. Northern Italian food is influenced by its neighbors in Germany and France as well as its cooler climate, so the dishes tend to be heavier, with more butter, cream, and meat. Italians to the north definitely eat pasta, but rice and polenta dishes are actually more typical. I was born in Rome, which is in central Italy, but both my grandparents were from the South (my grandfather from Naples, my grandmother from Sicily) so my cooking southern italian seafood tends to be more southern-influenced. Dishes from the South are sometimes considered more rustic than northern fare, but they're generally also lighter, with more olive oil and vegetables. They seem to fit my California lifestyle better, maybe because the climates are similar, but also because this lighter, more vegetable-based style of eating just makes me feel happier and healthier. Of course southern Italy is where some of the world's most beautiful (and glamorous) beaches can be found, and along the coast, it's all about fish and seafood. So in my tribute to southern cooking, I'm focusing on three easy, seasonally appropriate ways to use some of the region's best-loved ingredients. 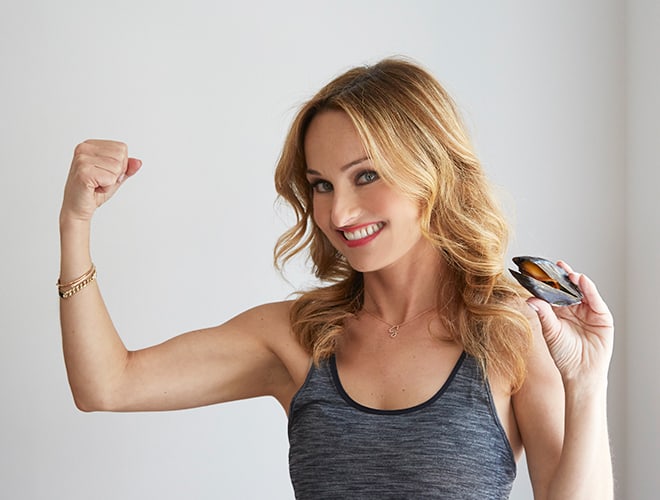 Just showing off my mussels!
I remember sailing around to all the Sicilian islands as a kid, and eating swordfish a hundred different ways. We used to joke that we would at some point have swordfish for dessert, maybe as ice cream! One of my favorites was swordfish kebabs, grilled on a wood-burning oven and served with salmoriglio sauce—a blend of olive oil, lemon juice, garlic, and fresh herbs.
I've included my take on that dish, but with sole, which is a lighter, flakier, and more sustainable alternative to swordfish (it's a "best choice" or "good alternative" on the Monterey Bay Aquarium Seafood Watch). Mussels are also very typical of southern Italian cooking, especially in Puglia, where they're eaten raw, breaded and br√ªléed, and layered with potatoes and rice, paella-style. I like to steam them with fennel, tarragon, and some beer—Italian, of course! My seafood salad is inspired by the typical Neapolitan version, which is made with mussels, clams, octopus, shrimp, and loads of parsley, but I've added zucchini, eggplant, orzo, and cannellini beans so it's both healthy and filling. Buon appetito!