What's the Difference Between Parmesan and Pecorino?

Many Italian recipes call for Parmesan or Pecorino (or both!) so what's the difference between the two cheeses?

Parmesan and Pecorino pop up in all kinds of Italian dishes, particularly pasta. Some recipes call for Parmesan, others Pecorino, and many classic Roman dishes call for a blend of the two. They're both Italian hard cheeses, super flavorful, and even look pretty darn similar- but there's actually a few big differences, too! 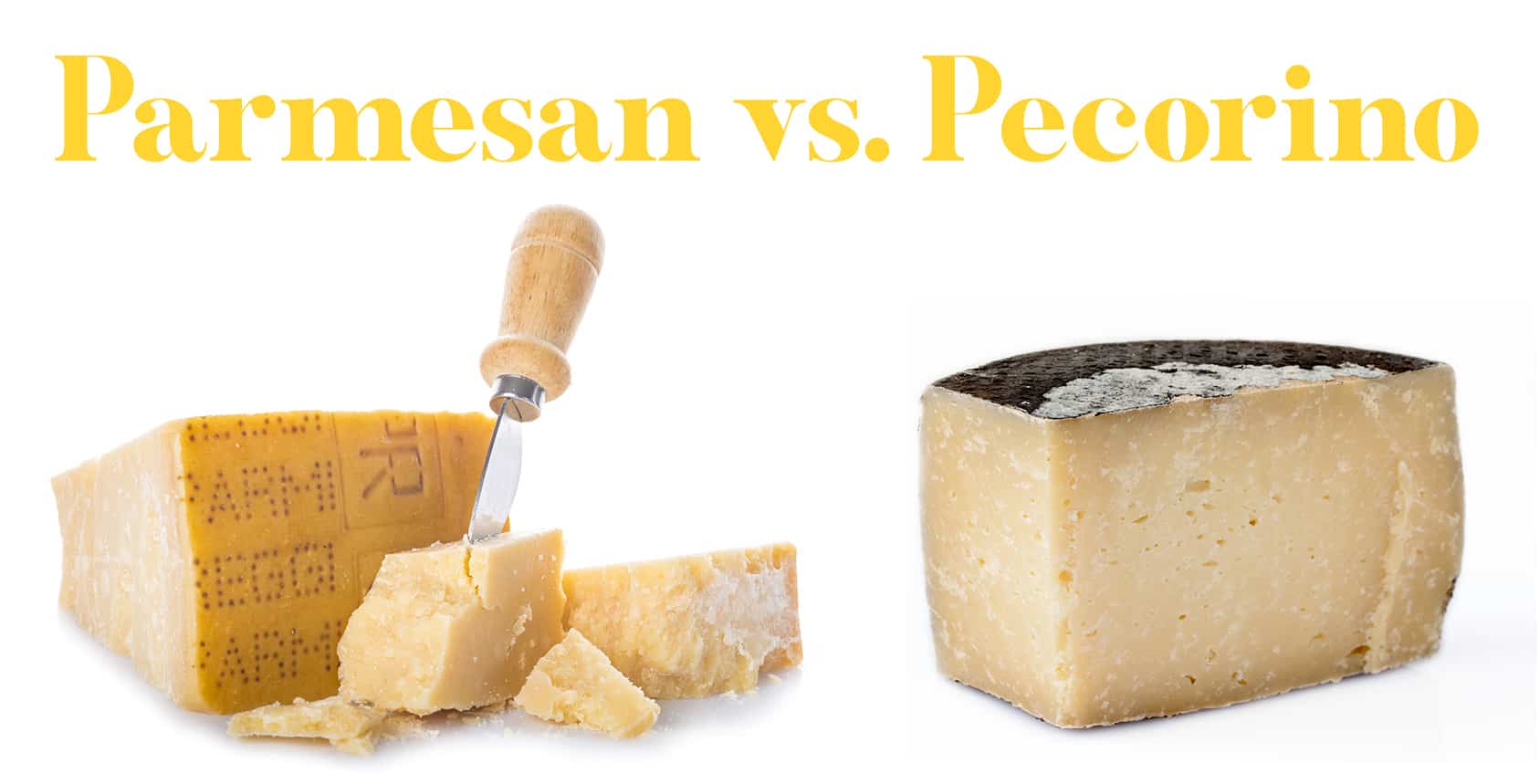 What are they made from?

Parmesan is an aged cow's milk cheese. We'd be remiss if we didn't clear this up before diving any deeper into the world of Parm, though - Parmigiano Reggiano isn't just a fancy Italian way to say "Parmesan" - they're actually different things! Parmigiano refers to the aged cow's milk cheese made in the Parmigianno region of Italy, and Parmesan is the domestic US-made counterpart. They can almost always be used interchangeably, but there are a few notable differences. Parmigiano is generally more expensive, and tends to be a lot more flavorful - and you also get a nifty Parmigiano rind to use in sauces and soups. Parmesan is a lot less expensive, which is something to consider for when you need a ton of it for a recipe. However, you don't get a rind with domestic Parmesan - pros and cons!
Pecorino is an aged cheese made from sheep's milk. Like Parmesan, there is a whole different world of Pecorino in Italy. We usually see "Pecorino Romano" here in the States, but in Italy there are a ton of varieties - like Caprino Romano, or Vacchino Romano - that all have slightly different flavor profiles.

How long are they aged?

Parmesan is aged anywhere from 12 to 36 months, which results in a very hard cheese. The longer that Parmesan is aged, it can have more crunchy "crystals" in its texture.
Pecorino, on the other hand, is not typically aged for nearly as long - just 5 to 8 months. Because the aging process is so much shorter than that of Parmesan, Pecorino is actually quite a bit softer - though it's still considered a hard, aged cheese!

Parmesan is known as the "king of cheese" for a reason - it has a flavor profile that could just about enhance any food it gets put on. It's mild, nutty, umami, and almost sweet flavor profile. Because the flavor is generally quite mild, Parm can go on a wide range of pasta dishes - we haven't met a pasta dish yet than Parmesan hasn't made to be better!
Pecorino, on the other hand, has a distinctly more robust flavor than Parmesan. Pecorino has a much more assertive, sharp and tangy flavor to it.

How are they used?

Parmesan is typically known for being used on pasta, but it gets used on a ton of Italian dishes. Chicken Parm, Eggplant parm, risotto, roasted vegetables... Giada even uses it in the crust of her apple pie! There aren't many savory Italian dishes that wouldn't benefit from a dusting of Parmesan. Additionally, Giada always likes to have some good quality shards of Parmigiano Reggiano on her cheese and antipasti boards.
Pecorino is used in a similar way, but because of it's stronger flavor, it shines in dishes that are more simple Giada prefers to use Pecorino in recipes where the flavor can truly stand out - such as Pasta Alla Gricia, or gnocchi with butter-thyme sauce. It also goes beautifully with sweet flavors - Giada often uses it in dishes with sweet peas like this tagliatelle, and it's wonderful on a cheese board paired with jam and honey.
The best thing about both of these cheeses, though? They're delicious together! Giada often uses a combination of both on simple pastas to bring a ton of amazing cheese flavor.